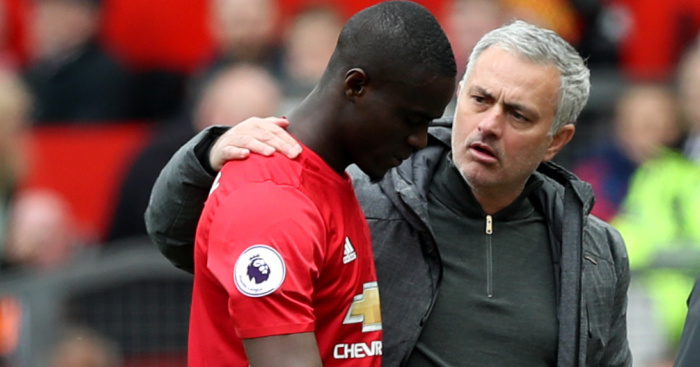 Eric Bailly’s future at Manchester United is reportedly under a dark cloud after the player became the latest player to fall foul of Jose Mourinho.

The United manager has a history of falling out with some of the top players to work under him and it seems Ivorian Bailly is the latest to run the wrath of the fiery Portuguese.

According to a report in The Sun, Bailly has angered his manager by his lackadaisical attitude – and the situation has been compounded by the defender missing the club’s Player of the Year awards dinner this week after reportedly complaining of toothache.

The club, and Mourinho, had stressed beforehand that attendance to the event was “compulsory” – yet Bailly further angered his manager by skipping the gathering, despite then laughing and joking around in training the very next day. A social media post on Instagram, in which he was seen dancing with Ander Herrera, is also said to have exasperated the situation.

And the paper reckons it all means Bailly’s future at the club is now in question, with the 24-year-old having been overlooked for the club’s last two matches and not featuring since their stunning 3-2 comeback win at neighbours Manchester City on April 7.

Bailly was set to be selected for the next game – the 1-0 home defeat to West Brom – but claimed he was too ill to play. His place in the side was subsequently taken by Phil Jones for the 2-0 away win at Bournemouth.

Jones then kept his place alongside Chris Smalling for the FA Cup semi-final success over Tottenham and the 2-1 victory over Arsenal on Sunday, with Bailly not in either squad.

It’s since been suggested both Chelsea and Arsenal are monitoring developments for the centre-half, who joined United from Villarreal in the summer of 2016 for £30million.