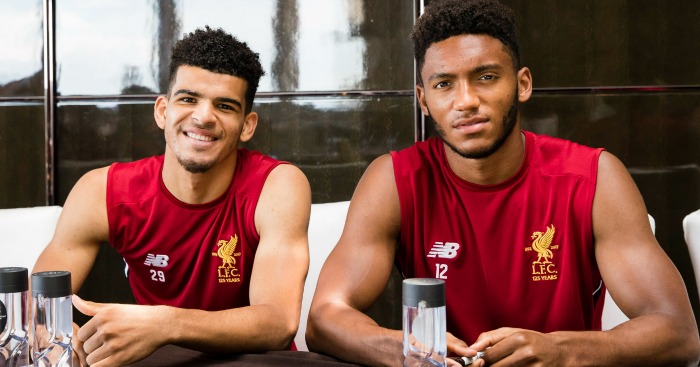 The England national team are ‘worried’ and ‘anxious’ over the future of Liverpool striker Dominic Solanke.

Solanke is rated highly within the England set-up, representing his country at every level from U16s to the senior side.

The forward was a key part of the team that won the 2014 U17 European Championship, won the Golden Ball award for best player at the 2017 U20 World Cup, and made his senior debut in November of that same year.

But the Daily Telegraph say England are ‘worried’ a lack of opportunities presenting themselves at Liverpool ‘could damage his hopes of an international future’.

Solanke is yet to even make a single matchday squad for the Premier League leaders – although Jurgen Klopp said he “will have a part to play” last month.

Despite that, England ‘are worried that his development is being affected’, and although Solanke trained with the senior side earlier this week, he is likely to lose his starting place at U21 level to those playing more often.

“I’m really pleased with Dom but I’m also a little bit worried about him because he is not getting the minutes and not getting the games,” U21 manager Aidy Boothroyd said.

“Our players have proved they can do it at international level but not as many of them as there should be are getting the opportunity to do that in the Premier League.

“There is no real rhyme or reason but a lot of the time, if the players are playing, it helps them get into the under-21 team.

“We have got some fantastic talent but a lot of them haven’t had game-time. Young players now are thinking of playing abroad first.

“I admire that for many reasons, I think it is great they want to learn different languages and experience different cultures and different ways of playing but the fact they have got to go abroad to play is a real red flag for the authorities. They will be thinking: ‘Hang on a minute, why is that happening?’”