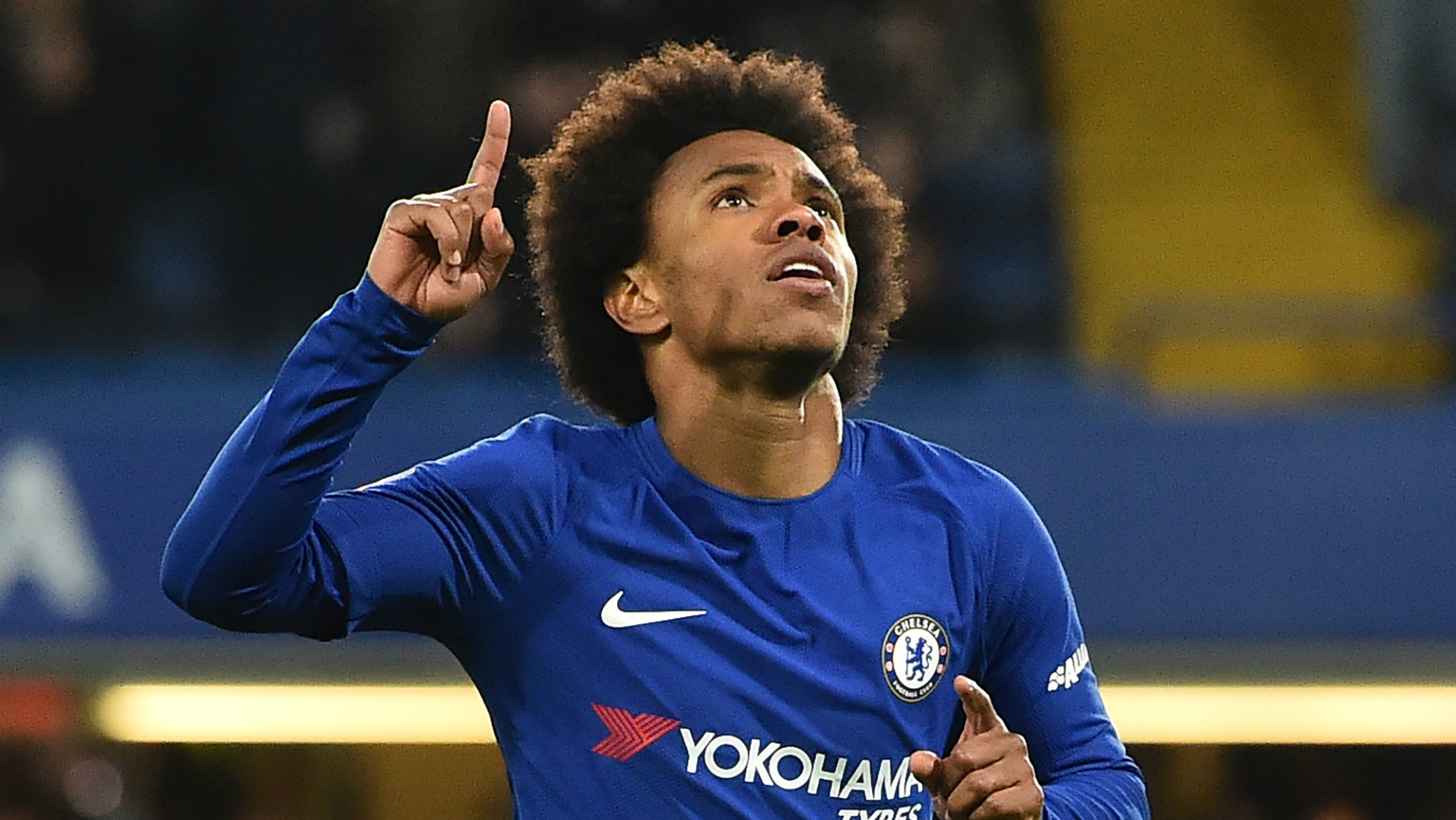 Willian smashed Chelsea into the lead with a fabulous individual effort that set the Blues onto a hard-fought but ultimately successful 2-1 win over relegation-haunted Crystal Palace at Stamford Bridge this evening.

The win puts the Blues two points adrift of fourth-placed Spurs in the Premier League and halts successive league defeats.

The Brazilian wide-man was excellent all game and on 25 minutes he cut in from the left, ghosted past two Palace players before driving home a low, shot past Wayne Hennessey. The ball came off his right post but it was unerringly accurate in its delivery.

Chelsea had a chance on nine minutes to open the scoring after a N’Golo Kante snap shot from the edge of the Palace penalty area was half-saved by Wayne Hennessy, and, fortunately for the visitors, cleared.

The Blues dominated the opening exchanges, keen to press home their advantage. Willian had a scuffed left-footer saved by the Eagles stopper a minute later.

But the South Londoners probably had their best chance of the game when Andros Townsend’s half-volley, from 20 yards out, dipped just to late to trouble Thiabaut Courtois and the ball clipped the top netting of his goal.

Chelsea’s dominance finally broke the resistance of Palace and it was a goal of individual quality from the right boot of Willian on 25 minutes. He cut in from the left, raced to the edge of the Palace penalty area and drove a daisy-cutter, goal-bound. The ball beat Hennessey and clipped off the foot of his right post and into the net.

Number two was seven minutes away and it was a quality counter-attack started by Cesc Fabregas, followed on by Marcos Alonso, a step over by Willian, a tap on by Eden Hazard to in-running Davide Zappacosta, who shot on goal was firstly stopped by Martin Kelly, the ball fell to the back of Hennessey, then back to Kelly and the ball slid into the back of the net for an own goal.

Chelsea thought they had scored twice in the final minute of the first half, but after another excellent attack, James Tomkins made a spectacular goal-line save to thwart Olivier Giroud. Thirty seconds later and Hazard had the ball in the back of the net, but he was adjudged to have strayed offside.

Roy Hodgson replaced Christian Benteke for Wilfried Zaha at half-time. Within 50 seconds, the Eagles had a great chance. Zappacosta gave a poor pass to Christensen who, lost the ball to Alexander Sorloth who raced clear. He put the ball past Courtois but saw the ball rattle the upright.

That scare prompted the Blues to plough their way up they other end and an inspired long run by Willian, saw the Brazilian get his pass to Giroud returned. The winger then thumped the ball goal-bound but Tomkins, once again threw his body in the way to save the certain goal.

Giroud then rattled the Palace upright following yet another quality set-up play on 66 minutes.

Antonio Conte made his first change on 72 minutes, taking off hard-working Giroud, bringing on Alvaro Morata.

Sorloth rammed the ball into the back of the Chelsea net with four minutes left but referee Anthony Taylor saw a push by Luka Milivojevic on Christensen and ruled the effort out.

The Eagles got a goal in the last minute when former Blue Patrick van Aanholt slipped the ball under Courtois after the Chelsea defence were sucked out of position by excellent play by Zaha.

But the Blues saw the remaining minutes out to claim full points.

Next up, a little matter of facing Barcelona, in the Camp Nou, on Wednesday in the Champions League knockout stage, seconds leg.