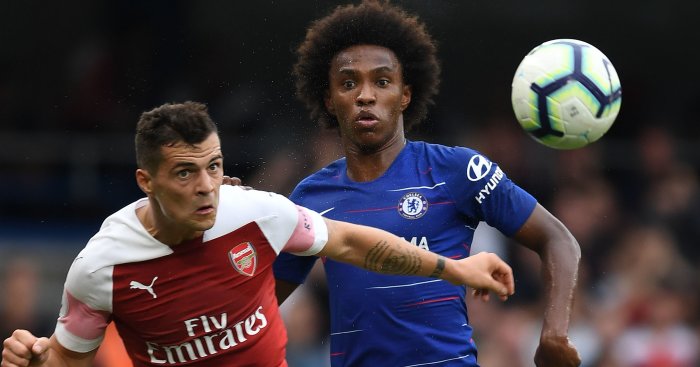 Chelsea have offered Willian to Real Madrid, according to a shock report from Spain.

The Brazil wide man was heavily linked with a move to Manchester United over the summer to link up again with Jose Mourinho, while Barcelona were also a rumoured destination for the player.

The LaLiga champions though signed Malcom from Bordeaux after being put off by the £70m asking price for Willian, who has started both of Chelsea’s Premier League games this season.

No though Mundo Deportivo claim that Chelsea will ask for €80million to sell the player to Real, with another €10million paid to the player’s agent to push through the deal.

The figures being quoted for the 30-year-old are likely to prove a stumbling block in any deal, but the player has claimed he wants to stay at Stamford Bridge.

“My will is staying at the club, unless they want to sell me,” Willian said after the Community Shield loss to Man City at the start of the month.

“We never know, but I have been always clear about my wish of staying here. My head is here at the Chelsea, but we never know about tomorrow. I hope to remain at the club.

“I have always been clear about enjoying playing for Chelsea, I have never (said) that I wanted to leave the club, but some situations that have happened with the other coach left me upset.

While new boss Maurizio Sarri is also happy to keep Willian, although he was not too happy with his timekeeping earlier this month.

“I spoke yesterday with him about his lateness, not about his future,” said Sarri.

“It was a very positive conversation. I am happy about it. There is not a Willian problem.