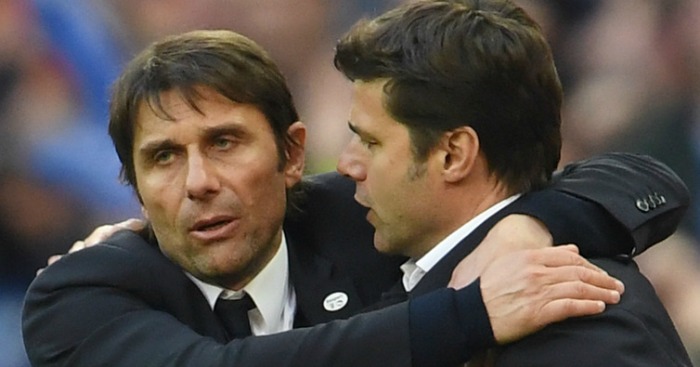 Argentinian Pochettino has been in charge of Spurs for almost four seasons but has so far been unable to end the club’s 10-year wait for a trophy.

The pair go head-to-head at Stamford Bridge on Sunday with their teams battling to secure top-four finishes and Champions League qualification.

“I think that, if Tottenham grew a lot in this period, he has a lot of credit for that.

“We are talking about a team who, in the last period for many years now, they are competing to win the title.

“Two years ago, they were very close to winning the title when Leicester won it. Last season they tried to compete with us.

“Don’t forget that only one team can win the title.

“You start every competition with six teams, six top teams who are ready to win something during the season.

“This season, probably Manchester City will win the title, but they dropped in the FA Cup.

Although the title is already out of reach of Tottenham and Chelsea, both sides progressed to the last four of the FA Cup before the international break.

Spurs face Manchester United in the semi-finals, while Chelsea have drawn Southampton.

Former Juventus coach Conte, who won three Serie A titles during his time in Italy, believes it is more straightforward to achieve success abroad.

“I must be honest, if you want to win trophies, maybe for important managers, it’s easier to go to another country,” he added.

“In England, if you stay here, never, never will it be easy to win trophies.

“But, for sure, every manager wants to try and win a trophy.”