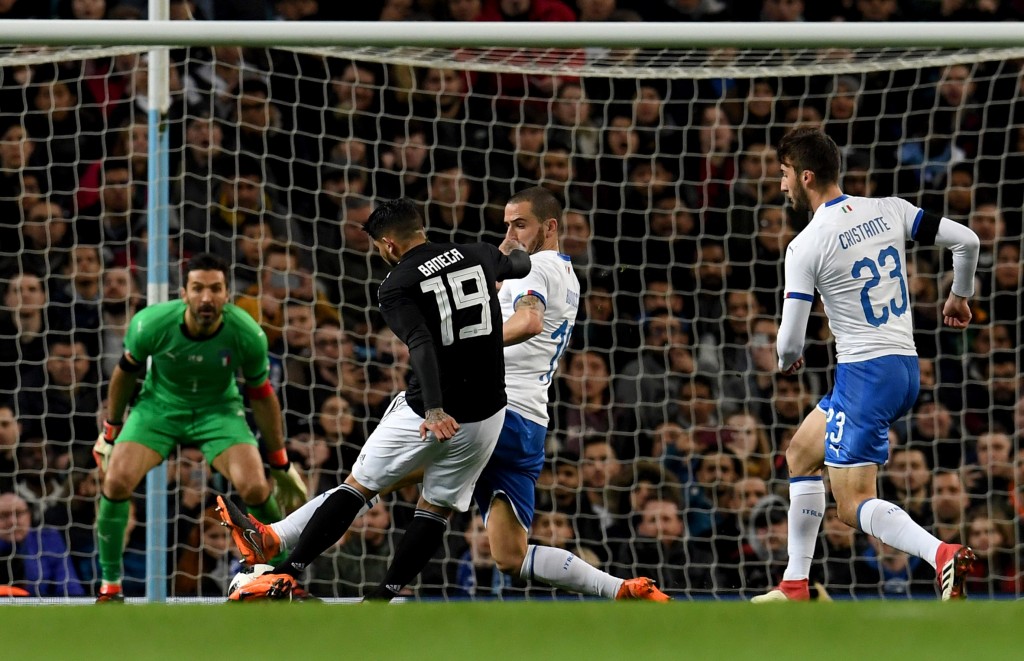 Argentina, sans Lionel Messi and Sergio Aguero, started off their preparations for the 2018 FIFA World Cup with a 2-0 triumph over Italy, at a half-empty Etihad Stadium on Friday.
While Aguero’s involvement had been surrounded by doubts heading into the game due to a back problem, Messi sitting out of the game came as a major surprise to many and seemed to have dampened the mood somewhat at the stadium.

However, the game was off to a lively start with Manchester City’s Nicolas Otamendi getting the first real opportunity of the match, but his header was spectacularly saved by Gianluigi Buffon. Angel Di Maria then saw his shot from a tight angle stopped by the veteran stopper not very long after.

The game slowed down considerably from thereon, only to burst into life towards the end of the first period when La Albiceleste came close to breaking the deadlock on as many as three occasions. Midfielder Leandro Paredes had a shy at goal, before Buffon was once again called into action, this time around by Nicolas Tagliafico and Gonzalo Higuain. The legendary goalkeeper was up to the task once again.

Post the break, Italy had their best chance to open the scoring when Lorenzo Insigne sliced wide of the post from a position where he should have scored from. Manuel Lanzini threatened to give Argentina the lead, but his headed effort went over the bar as the stalemate ensued.

Antonio Candreva saw his effort saved by Argentina goalkeeper Willy Caballero, who had been picked over Sergio Romero by manager Jorge Sampaoli. The Chelsea goalie then went on to deny Insigne a goalscoring opportunity, boosting his chances for a spot in the squad for Russia.

With just fifteen minutes left on the clock, playmaker Banega unleashed a beautifully struck left-footed shot from the edge of the area, after a neat one-two with Giovanni Lo Celso, to hand Argentina the lead. Lanzini sealed the fate of the game five minutes before time, scoring his first senior goal for Argentina with a curling strike from inside the box.