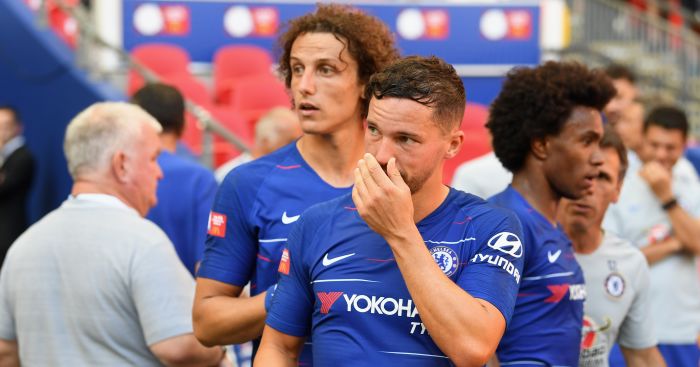 Midfielder Danny Drinkwater has been omitted from Chelsea’s squad for their upcoming Europa League campaign.

The 28-year-old has so far failed to make the Chelsea matchday squad for the opening four Premier League outings and had hoped to earn some game time in Europe this season.

However, Maurizio Sarri has opted not to register the England midfielder for the games against BATE, PAOK and Videoton in Group L of Europe’s secondary cup competition.

Drinkwater was signed from Leicester for £35million last summer but made only 22 appearances under former Blues boss Antonio Conte after arriving in west London with a calf injury.

Sarri reportedly told the midfielder that he could quit Stamford Bridge towards the end of the summer transfer window, but Drinkwater was unable to find a new club.

Both Southampton and Leicester have both been spoken of as potential loan options in January, with Drinkwater highly unlikely to force his way past new boys Jorginho and Mateo Kovacic, along with the returning Ruben Loftus-Cheek in Chelsea’s midfield in domestic competitions.

Meanwhile, highly-rated youngster Callum Hudson-Odoi is not on Chelsea’s first-team list for their Europa campaign but the 17-year-old is registered as a B-List player for the youth fixtures, which means he can be promoted to the senior squad on the day of the game, as reported by Metro.

Versatile defensive midfielder Ethan Ampadu has to be registered on the first-team list for the Europa League as a non-homegrown player as he has been at Chelsea for less than two years.