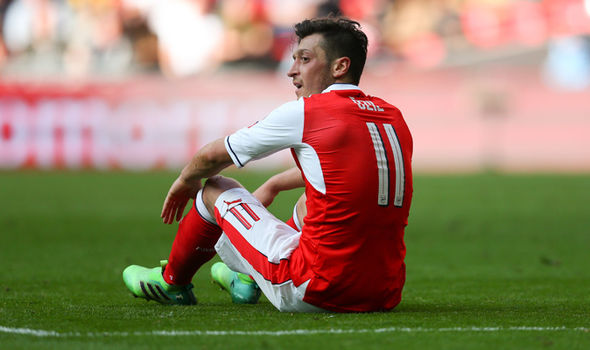 Arsenal crashed out of the Europa League on Thursday night and as far as Martin Keown was concerned there was one player who stood out as being more to blame than the rest – Mesut Ozil.

The Gunners lost 1-0 on the night and 2-1 on aggregate to Atletico Madrid and Arsenal legend Keown was on pundit duty for BT Sport.

And he was not impressed with the German midfielder’s performance in the Wanda Metropolitano.

Keown did not hold back as he tore into the 29-year-old.

He said: “I haven’t been happy with him for some time, it seems as if he picks and chooses his games, he wasn’t on it and you can hide a little bit in that wide position.

“When you look at Griezmann and you compare him to Ozil you can’t, Ozil wasn’t there tonight, he didn’t perform.

“Somebody needed to get hold of him a long time ago and give him a shake and say ‘we are working for you, but you’re not working for us. I bet he doesn’t play again this season. He’s not conning me, that’s not a proper performance, there’s so much more under the bonnet.

“He wasn’t fit to wear the shirt for me. This needs to be said, he needs to be dug out because we expect better from him, he’s a World Cup winner, these are crocodile tears, he’s not conning me, I feel he’s not giving enough for Arsenal Football Club.”