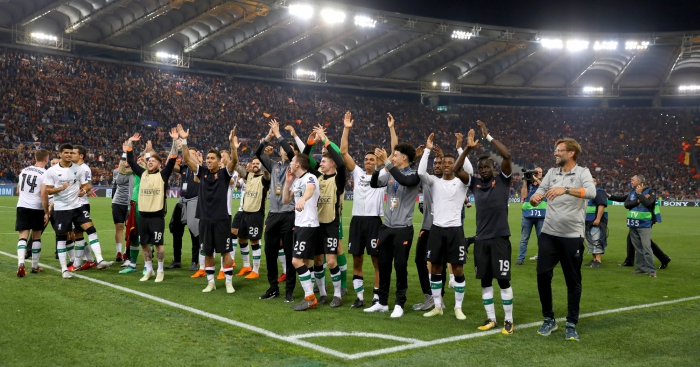 Liverpool reached the Champions League final for the first time in 11 years on Wednesday night as they completed a pulsating 7-6 aggregate win over Roma.

It is the first time an English side has reached the final since Chelsea won the competition in 2012, with the Reds only the sixth English team to play in a semi-final since 2009.

Jurgen Klopp’s men led 5-2 after a stunning display in the first leg at Anfield which saw them fly five goals in front, only for two late strikes to give Roma a sniff.

The Italian side, who have never reached a Champions League final, completed an incredible three-goal comeback against Barcelona in the quarter-finals but couldn’t quite make history repeat itself.

Roma did win the second leg 4-2, after Liverpool had twice led on the night, but their final two goals came just two late to send the tie to extra time.

Record breakers
The Merseysiders became the first side to score against Roma at the Stadio Olimpico in the competition this season, with Barcelona, Atletico Madrid and Chelsea all failing before them.

In a record-breaking season for Liverpool (mostly thanks to Mohamed Salah), we’ve taken a look at 10 other records they have broken and firsts they have achieved in the Champions League so far this season.

– Their second against Roma took them to 46 Champions League goals this season, beating Barcelona’s previous record of 45, set in the infamous 1999-2000 edition of the competition.

– James Milner’s corner saw Roberto Firmino head in Liverpool’s fifth goal in the first leg, and took him to nine assists in the Champions League this season. The previous highest assist tallies were set by Neymar and Wayne Rooney, who had both managed eight.

– With an aggregate score of 7-6, their semi-final against Roma was the highest-scoring last-four tie in the history of the competition.

– This season they have equalled the record for the most away goals in a single Champions League campaign with 20.

– Thanks to Liverpool’s defeat of Roma, this year is first time since 2004-05 that the team who eliminated Barcelona hasn’t played in the final.

– Sadio Mane’s goal in Rome means he, Salah and Firmino are the highest scoring trio in a single Champions League season, overtaking Bale, Benzema and Ronaldo from the year the latter scored a record 17 goals. The Reds trio’s strikes have been more evenly spread, with Salah and Firmino scoring 10 and Mane nine.

– Between themselves and Real Madrid, the two finalists have won 17 European Cups, which is unprecedented.

– This will be Liverpool’s eighth Champions League/European Cup final, which is three more than any other side.

– Their 7-0 group stage win over Maribor was the highest away win by an English side in the Champions League ever.

– Liverpool are the only team to score five or more goals in four games in a single Champions League season.

Every time Liverpool have won the Champions League or European Cup, the opposing team has been playing in white.

The last time Real Madrid lost a Champions League or European Cup final was 1981. Against Liverpool.